The Wall is a prime-time game show that is a mixture of the pricing game "Plinko" from The Price is Right and the British game show Tipping Point, where contestants, in one night, can win over $12,000,000 in a single game.

Two contestants work together as a team in playing a game of knowledge and luck. The Wall has seven drop zones at the top of the wall and fifteen targets at the bottom of the wall, all containing various amounts of money from $1 up to $1,000,000. The team will be asked a series of questions. Correct answers to questions cause a green ball to fall down the wall and add money to the team's score. Incorrect answers to questions cause a red ball to fall down the wall and subtract money from the team's score. There are three rounds in the game. The red balls in the

In the first round of the game, the two contestants are shown a question with two choices. Three white balls are inserted into drop zones 1, 4, and 7, and the contestants have a limited amount of time to lock in their answers (the time expires when the first ball reaches the top of the drop slots). Once all three balls reach their targets, the question's money value is revealed. If the answer is correct, the balls turn green and the value of the targets that the balls landed on is added to the team's score. If time expires or if a wrong answer is given, the balls turn red and the value of the targets that the balls landed on is subtracted from the team's score. (Scores during the game cannot go below $0.) The team has to have money after five questions in order for the first round to be completed; that total serves as the team's potential guaranteed money total. The minimum amount of money per question available on the Wall is $3 while the maximum is $75,000. Plus, in what will be revealed to the contestants at the end of the game, each question answered correctly is worth $20,000.

Starting with Season 4, the team may choose to double the total value of any one question by pressing a gold "Free Fall Plus" disk while the balls are falling.

The money in this round is as follows:

Before the second round starts, one of the team's members is placed into an offstage isolation booth. Until the game ends, that player will have no idea how many questions they've gotten right or how much money is in the bank.

Here is the money distribution for Round 2:

The second round starts with two free green money ball drops. The onstage player chooses the two spots to drop these balls (they can be in the same slot or in different slots). Both balls are dropped and the money amounts they land in are added.

The onstage player is then shown the three possible answers the first of three questions for the round. Depending on their confidence in the offstage player, they choose where to put the next ball. With the higher amounts now progressing to the right, the player can choose to put the ball in the lower-numbered slots if they have less confidence, or in the higher-numbered slots if they have more confidence. The offstage player is then shown the question and the answers and makes their choice. If they answer correctly, the ball turns green and is dropped to add money to the bank; if incorrect, it turns red and dropped to subtract money.

After the third question, two red balls are dropped from the same position(s) that the opening two balls of the round were dropped, subtracting their amounts from the bank. (NOTE: If the bank hits $0 with any balls remaining to be dropped, further drops are skipped, as the score cannot drop below $0.)

From Season 3 onwards, the starting and ending drops are replaced with "Superdrops", in which a ball is dropped from all seven slots. The maximum slot value was reduced to $150,000 for then fourth season.

Here is the money distribution for Round 3:

Round 3 is played similarly to Round 2. The round starts with four green ball drops to add free money, but this time, each ball is dropped individually after being played. (Again, the onstage player can choose to drop the balls all from the same slot, or from different slots.)

Each question in this round has four possible answers, and are of increased difficulty to those in the earlier rounds. Gameplay is the same, with the first question getting a single ball drop, with the option of "Double Up" on the second question and "Triple Up" on the third.

Before continuing on, a contract is sent to the offstage player (via pneumatic tube), who has a decision to make. They can either sign the contract, guaranteeing them the amount won during Free Fall plus $20,000 for every correct answer in Rounds 2 and 3, or tear it up and hope their bank is a much larger amount.

Once the offstage player returns the contract, four red balls are dropped--again, one at a time--from the same slot(s) and in the same order as the green balls at the beginning of Round 3. Those amounts are subtracted from the bank, giving a final bank total to the team. (NOTE: As before, if the bank hits $0 with any balls remaining to be dropped, further drops are skipped, as the score cannot drop below $0.)

In regular play, if a team got every question right, all their green balls landed in the highest amounts, and their red balls all fell in $1 slots, here's what the team could accumulate in each round and in total:

The following list of countries that have aired their versions of The Wall includes: 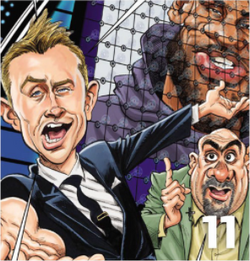 The popular satire magazine MAD had a parody of The Wall as This Wall in Issue #546 (August 2017) written by Dick DeBartolo and illustrated by Tom Richmond hosted by Crisp Hard-shtick (a parody of Chris Hardwick).

NOTE: On the screen, you'll see the face of creator LeBron James counting his money along with the many brief cameo appearances in the panel by Drew Carey, (the late) Alex Trebek & Donald Trump.