"The secret to winning a quiz show lies in this finally balanced equation, knowing the answer and beating the competition to the buzzer. The average distance from contestant to buzzer is 6.2 inches, but what happens when we increase this distance to 19 yards and make our contestants race through extraordinary challenge courses to try to reach their buzzers first with the correct answer? They may know the answer but can they reach their buzzer? Being right is only half the battle. Five contestants will play, four will be eliminated and only one will walk away with the $50,000 grand prize. In this game, you need the right balance of brains and brawn. Who will go THE WHOLE 19 YARDS?"

The Whole 19 Yards was an unsold game show pilot in which five contestants race through obstacle courses in an attempt to answer trivia questions and win $50,000 in cash.

Five contestants compete in a trivia/stunt hybrid for $50,000. In order to answer the questions correctly, they must run through an obstacle course with their buzzers at the finish line. The questions appear on their TV screens in form of clues to a puzzle. The clues will appear one at a time and as soon a player knows the answer, s/he must run through the course and try to reach his/her buzzer. They don't have to use their hands, they can use any body part they wish. The catch is that when running, they won't know what the remaining clues are. The first player to finish the course and buzz in with the correct answer would advance to the next round, while the other players go back to the start and start again on a new question. The process would continue until there was one player left; that player would be eliminated from the contest. The last surviving player at the end of the show would be the one to win the $50,000.

Th following list of other countries that ended up greenlighting versions of The Whole 19 Yards include:

The title is loosely a play-on-words parody of the 2000 comedy/crime film The Whole Nine Yards. 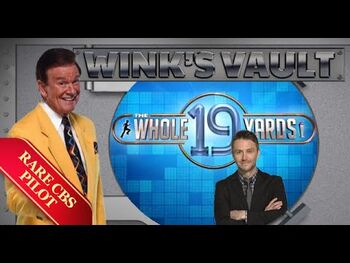 TV Week article on the US pilot

Retrieved from "https://gameshows.fandom.com/wiki/The_Whole_19_Yards?oldid=231070"
Community content is available under CC-BY-SA unless otherwise noted.