Three on a Match

FIRST FORMAT INTRO SPIEL:
"(Contestants,) If your first three picks match, you win that prize plus a new car, on Three on a Match!"

SECOND FORMAT INTRO SPIEL:
"(Contestants,) If your first three picks match, you win the game instantly and at least $5,000 in cash and prizes. It's Three on a Match!"

Three on a Match was the NBC daytime quizzer that mixed in with Sale of the Century and Concentration.

Three contestants competed in a game of answering true/false questions & matching three of anything.

There were two formats to the game:

Host Cullen presented the contestants with three categories (with the third being a general knowledge/"variety" subject most of the time). Then the contestants secretly bid how many questions they wished to answer on whatever category they choose. Their bids were then revealed and the highest bidder won the bidding. Tied players canceled each other out, leaving the third player as the sole winner, unless everybody's bid tied, in which case all three players would re-bid until the deadlock was broken. The number of questions each contestant bid were all multiplied by $10 and they were all added together to come up with a total value which was fed into the pot with the maximum total being $110 (Example: 4+2+4=10, which would make the pot worth $100).

The winner of the bidding would pick a category and then have a chance to complete his/her contract by answering the number of questions he/she bid. Missing a single question gave the next high bidder a chance to complete his/her bid with the category of that player's choosing. A miss from that player gave the lowest bidder a chance. If two players were tied after the bid winner missed a question, another auction was held by those players. If two ties occurred by the two players who lost the first bid or if all three players missed a question, another question round was played.

When choosing a category, a player could find one of these special bonuses behind one.

The first player to complete his/her contract won all the money in the pot. The question round winner would then decide to either bank the cash & play on, or use the money to play the board. To go to the board, a player had to have at least $90 unless he/she had earned free boxes.

The game board in question consisted of 12 squares divided into three columns & four rows. The columns were represented by money amounts ($20, $30 & $40), and the rows were represented by colors (red, green, yellow & blue). Behind those 12 boxes were prizes with a common theme; behind only one of the boxes, however, was a card reading "No Match".

The player in control of the board by choice used the money he/she won to pick boxes. He/She made his/her choice by saying "(insert amount) on the (insert color)", in other words picking by amount & color. Ex: "$20 on the blue". The player in control could only buy three boxes in a single column. The game was called Three on a Match, because the object of the game was to find three prizes that match each other (one in each column, not three in one column or one & two in two columns). If the contestant earned free boxes in the question round, and if he/she ran out of money, that contestant began to take that number of free boxes without penalty. The player in control would continue buying boxes and revealing prizes until he/she found three of a kind or had no money leftover (or didn't have enough) (and no more free boxes). A contestant's turn at the board would also end if it became somehow impossible to make a match. When any one of those things happened, the game continued.

Theoretically, $270 would buy almost the entire board since players could only buy three boxes in any one column.

The first player to make a match, won the game and kept the prize matched, as well as any money leftover. As the opening title said, a player who made a match on his/her first three picks of the board not only won the game, but also a car.

Championship players retired from the show after winning five games. In addition, those successful players also won an additional $5,000 in cash.

The question round remained the same, but it was the board that went through some changes. For now instead of prizes, the game board hid images that fit under a specific category. Single matches no longer won the game, instead they just won the round for the contestant who matched and started another round. The first player to make three matches (thus winning three rounds) won the game; if, however, a player got three on a match on his/her first three picks of the round, he/she automatically won the game. The winner of the game won a prize package worth over $5,000.

Championship players no longer retired from the show after winning five games. Instead, like many other game shows with returning champions (including Jeopardy! today), championship players simply stayed on the show until they lost. In addition, winning seven matches in a row won $5,000 in cash and a new car. This meant winning a round in just one trip to the board, without an opponent winning even one round each time (this did not apply to the first consecutive round, as they could do it in more than one trip).

On special weeks, one special image would appear on the board regardless if it fits the board criteria for the round. If a player found a three on a match using that symbol (no matter how many boxes it took), he/she automatically won the game and was entered into a special drawing at the end of that week.

Starting on October 16, 1973, all three contestants played a special game for a cash jackpot which started at $1,000 and grew by that amount every fifth show it wasn't won. The game board now consisted of 10 dots and two half dollar bills. The contestants took turns picking boxes until nine dots were revealed, or until one player revealed a half dollar bill. When the latter happened, the contestant who found it had one chance to find the other half dollar bill and win the jackpot.

During the show’s last 13 weeks, the rules were played differently. Bill would announce a category, and then read a series of 5 open-ended questions, with the contestants ringing in to answer. If the contestant rang in with an incorrect answer, the amount of the question was split between the other 2 contestants. The questions started at $40 and increased by $10 every question, which a maximum amount of $80. Some questions were known as “Takeaways”. On a “Takeaway” question, answering correctly allowed that player to decide which opponents contributed which amount of the question value to the player. If the contestant got the answer wrong, the money amount was deducted from his/her score and divided between both opponents. At some point in the format change, a new penalty was added to the board; a stop sign. If the contestant found the stop sign, he or she had to stop buying boxes immediately.

In 1973, Reg Grundy bought the rights to produce an Aussie version of Three On A Match for the Seven Network hosted by Bob Moore. It was dubbed as "Australia's first colour game show", although Australian television shows back then were still in black and white at the time. The questions and board values were divided by ten, meaning each pot was worth $1 per number of questions, while the prize board was played as a standard end game with a vacation as the top prize.

Milton Bradley made only one edition of the board game in 1972, which followed Format #1. 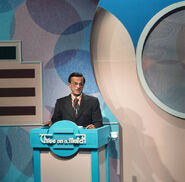 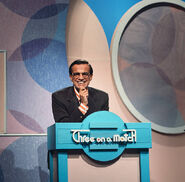 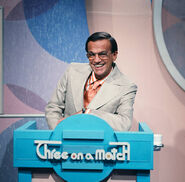 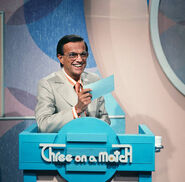