Two contestants, one a returning champion playing "X", the other the challenger playing "O", faced a tic-tac-toe style game board. On the board were nine categories in nine boxes.

The contestants in turn picked a category, then the host asked a question under that category. A correct answer won the box by placing his/her symbol in it, an incorrect answer meant the box remained unclaimed. After each turn (originally after each round), categories shuffled to different positions. The object of the game was to place three Xs or Os in a row, either across (horizontally), up and down (vertically), or diagonally.

Along the way, correct answers also added money to the pot. The outside boxes were worth a small amount, while the center box was worth even more, since the questions there were tougher; in fact they were all two-parters, and the contestant in control was given extra time to think it over.

The first contestant to get tic-tac-dough won the game, became Tic-Tac-Dough champion, took all the money in the pot, and (starting in the 1970s) went on to play the Tic-Tac-Dough bonus game. If the game ended in a tie (eight boxes for both players with no chance for a win, or the board was completely filled-up), a brand-new game was played (with new categories starting in the 1970s), and the pot continued growing from the last total amount from the previous game. Challengers ("O" players) won money for each tie should he/she lose.

The game board had big 9-sided "category rollers" (with the name of one of the nine categories on each side) used to shuffle the categories, and light boxes to light up the Xs & Os.

In the daytime show, the outer boxes were worth $100, while the center box was worth $200, for a maximum total of $1,000 per game. In the nighttime show, the outer boxes were worth $300, and the center was worth $500, for a total of $2,900. Categories shuffled after the O player's turn (that rule would carryover into the CBS daytime version and for most of the first season of the nighttime syndicated version), and contestants who chose the center box could opt for the extra time, if need be.

Champions from this version could decide to either continue playing or retire from the show. If the challenger won, the money in the pot was taken out of the former champion's grand total, potentially leaving the former champion with nothing. Losing challengers won $100 for each tie game.

There was no bonus game in this version.

The well-remembered version premiered on July 3, 1978 on CBS and lasted for two months, but gave light to the syndicated nighttime version which lasted for an incredible eight years.

The game board was computerized and had nine television monitors, designed by Bob Bishop of Apple Computer, Inc., and it was driven by nine Apple II computers, each one responsible for displaying a single box of the game board, and in turn controlled by an Altair 8800 system. It was the first use of computer graphics on a television game show.

The values of the boxes in the CBS summer run were the same as the 50s NBC daytime run, but in the syndicated run, the values were upped to $200 for the outer boxes, and $300 for the center, for a maximum of $1,900 per game. Categories shuffled after each player has had a turn, and starting with this version, contestants who chose the center box were required to use the extra time, even if had or thought they had the correct answer to that point.

During the CBS run, categories could appear in either a blue background box (which meant the player who selected the category was the only one who responded to the question) or a black background box (which meant the question was a "jump-in" for both players, using the buzzers on their podiums). This did not affect the value of the questions. In addition, if a game ended in a tie, one final "jump-in" question would be asked to determine the winner of the game. The black boxes were eliminated in the syndicated run, and all questions were for just the controlling player(s) until the addition of the "Red Box" categories (see below).

Starting in Season 2 of the syndicated run, losing challengers won $250 per tie game.

Champions in the CBS run stayed on the show until they were either defeated or exceeded the then CBS winnings limit of $25,000 or more. There was no limit whatsoever in the syndicated run; they just played till they lost.

Starting in Season 2 of the syndicated run, certain categories appeared in a red background (regular ones appeared in a blue background). Those were very special categories. Some had special questions, some could affect the outcome of the game, and others allowed both contestants to play. None of them appeared in the center box, for none of them had two-part questions.

The game board was completely computer generated, and displayed on one projection TV monitor which was housed inside a giant ball.

Most of the red categories were revived for this version. The Jump-In questions were either one of four W-question words (who, what, where, and when) or a general subject.

There was no money offered to losing challengers for tie games.

Champions stayed on the show till they won 15 matches or were defeated, with the most won being 12.

Contestants stopped the shuffling of the categories themselves by hitting their buzzer, which was also used on the "Jump-In" questions (albeit a pitch lower). Speaking of which, unlike the classic version, the categories shuffled before each turn.

Bonus Round: Beat the Dragon[]

In the bonus game that started in 1978, winning contestant faced the board to which its nine boxes were numbered 1-9. Behind all but one of the numbers were either money amounts or various X's & O's, and some "WIN" symbols. Behind that one remaining number was a "dragon" icon. The winning contestant's job was to meet a certain goal before running into the mean green dragon. Every safe square usually earned money, which the contestant could stop and keep if he/she wished, or risk it to keep playing. Winning the bonus round earned a cash prize of at least $1,000 and a prize package worth between $2,000-$5,000. Finding the dragon ended the game and "burned" the money.

The bonus round from the first syndicated version had two different formats.

In this bonus game, the board now consisted of eight tic-tac-toe symbols (four Xs & four Os) and only one dragon. The Xs & Os were jumbled up making sure that there was only one way to win. The winning contestant started calling off numbers, and for each symbol found (either X or O), $150 was added to the pot. Later in the run, if the contestant found that one Tic-Tac-Dough, his/her cash total was upped to $1,000, unless of course the player uncovered a total of seven boxes (for $1,050) or all eight (for $1,200).

From the very first playing of the CBS bonus game.

From the second playing of the CBS bonus game. The first ever bonus game win.

This is the starting board from the syndication bonus game.

For a time in 1983, an audience game called "The Dragon Finder" was instituted; it was played whenever the bonus round was won or a contestant stopped early. Instead of uncovering the board immediately to find the dragon, a randomly selected member of the studio audience was called upon to expose where the dragon was hidden behind the remaining numbers. The contestant in control chose a number from one of the remaining ones on the board to uncover the dragon. If that contestant failed, another audience member was chosen to do the same. Originally, finding the dragon was worth a flat $250. Later in the game's run, $50 was added for each unsuccessful pick. Also later on, each audience member who played received a Dragon Finder cap, which was introduced on a Friday "Hat Day" the week before the audience game began. (see below).

The 1990s bonus game was played the same way as the CBS bonus, except with these differences:

You came for fortune and you came for fame; but if you pick the Dragon, you'll lose the game!

You came here and it's your lucky day? Pick the Dragon Slayer, and he'll double your pay!

Finding the Tic-Tac-Dough with the chosen symbol or finding the dragon slayer doubled the cash (up to $8,000), and won the prize package. If the dragon was found, you know what he does. Later on in the run, the dragon slayer and dragon would each introduce themselves by rapping.

In 1983, the show invited eight of its (at the time) all-time highest winners, all of whom earned a collective total of $1,248,500, back to play for their favorite charities. In each game, there was no pot, no red categories, and the loser played the bonus for $5,000; hitting the dragon earned $1,000. The final match was best of three; the winner earned $50,000 while the runner-up won $25,000. In case of a tie during the main game, a multiple answer question was posed, as identical to the Seesaw category, the first person who did not come up with another correct answer, repeated an answer or ran out of time lost.

Tic Tac Dough (Martindale & Caldwell Versions) was shown on Game Show Network before, but some seasons may not have been rebroadcast. GSN's most recent lease of the series was the full 1979-80 and early 1981 season, ending to the episode in which Thom McKee was defeated before reverting back to the 1979-80 season premiere. That lease ran from January 2008 to January 2009.

The 1990 version was reran on USA Network after cancellation.

On March 2, 2020, GameTV in Canada started airing reruns of Tic Tac Dough, beginning midway through the final season which was hosted by Jim Caldwell.

In 2006, Tic Tac Dough was ranked #32 as one of The 50 Greatest Game Shows of All Time, the special was hosted by Bil Dwyer.

In a 2019 episode of The Goldbergs called "I Lost on Jeopardy!", a brief clip of Tic Tac Dough can be seen in the opening intro. 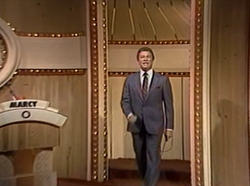 ADDITIONAL NOTE: Other game shows that were also mentioned were: The New Newlywed Game, Wheel of Fortune, Family Feud (Dawson), TTD's companion show, The Joker's Wild, Press Your Luck and of course Jeopardy!. 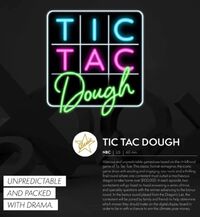 Countries have aired their own versions of Tic Tac Dough include: