Game Shows Wiki
Register
Don't have an account?
Sign In
Advertisement
in: Puzzle, Word Games, 2 out of 3 match,
and 16 more

To Say the Least

PILOT SPIEL: "To Say the Least! The game where men of few words compete against women who may use even fewer! And now, here's your host, Tom Kennedy!"

SERIES SPIEL: "To Say the Least! And now, here's your host, Tom Kennedy!"

To Say the Least was the short-lived word game where the lesser the information, the harder the chance to solve a puzzle.

Two teams of three players (consisting of two celebrities & one civilian contestant) competed in a battle of the sexes (men vs. women) word game which asked the question, "How little information do you need to help your partners?"

To start, two contestants (with the celebrity partners isolated) were shown a sentence which talked about a specific subject, followed by the subject itself. Then the two players took turns removing words from the sentence until either player challenged the partners of the other player to play or until there was one word left, causing the partners of the player who eliminated that next to last word to play. The isolated partners were then released from isolation and saw what was left of the sentence, but only the challenged partners could solve the puzzle. If the challenged partners could do that, they won the game, but if not, the game went to the opposing team. The first team to win two out of three games won the match, $100 and a prize package and got to play the All-Star Game.

This is the board the contestants view when taking out words.

The yellow contestant area from the pilot.

The blue contestant area from the aired series.

There's your sentence and subject. Now whittle it down to (almost) nothing and get the other team to play!

After some "pruning", only the word "Guinevere" is left.

In the All-Star bonus game, the four celebrities stood behind four numbered doors. Their positions were determined by a random draw backstage. The winning contestant was shown one more sentence and the subject, and then eliminated words, leaving only three left. After that, the celebrity behind Door #1 came out to see what was leftover and then take a guess. A correct guess won the contestant $100. Then the champion took out another word (with or without conferring with the first celebrity) after which the second celebrity came out from Door #2 to take a guess. A right answer from the that celebrity won the champion an additional $200. Finally, the winning contestant took out one more word, leaving only one left, and the final two celebrities one at a time took a chance. If either one of the remaining stars solved the puzzle, the winning contestant won a jackpot which started at $2,000 and grew by $1,000 for every bonus it wasn't won.

Remove words, but leave just enough for the celebrities to make correct guesses.

Wayne (the contestant) confers with Ruta on what word to remove next.

And Farr goes down!

Players stayed on the show until they lost two matches, or won seven matches. Any player who won four matches won a brand new car. 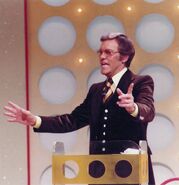 The triple beep sound used on this show was later used in a later NBC game show, Scrabble.

To Say the Least premiered and ended on the same days as the failed Ralph Edwards production & Arte Johnson-hosted program Knockout.

Tom hosted three short-lived game shows in a span of two years. To Say the Least was the last one; the other two were 50 Grand Slam, and the daytime version of Name That Tune.

The theme song from this show was later used in a pilot for another short-lived syndicated Heatter-Quigley produced game show Bedtime Stories in 1979.