To Tell the Truth

The topic of this page has a Wikia of its own: To Tell the Truth.

To Tell the Truth is a game show where three people, all of whom claim to be someone, are questioned by a panel of four celebrities. One of them is the real person, while the other two are just impostors. The panelists take turns questioning the people about their subject and then try to guess which of the three people is the truth teller. Originally, in the 1956 pilot, it was called Nothing But the Truth.

To start, three contestants, all of whom claim to be the same person, introduced themselves (most of the time the contestants are of the same sex, on rare occasions there would be a mixture of both sexes), then the host read the sworn affidavit of the real person. After the affidavit was read and when the challengers went over to their desk, the panelists one by one asked a series of questions to the challengers based on the affidavit in some way for an unmentioned amount of time. Once one panelist's time was up, another panelist started questioning, except in the 2016 version, where the panelists simply took turns asking one question per turn until time was up. The impostors were allowed to lie, but the real person was game bound to tell the truth (hence the name of the show). Once the entire panel's time was up, they started to vote for whoever was the real person. Each panelist showed his/her vote, and regardless of whoever they voted for, the appropriate panelist's vote for the appropriate contestant was signified by an "X" (in most versions the Xs appeared in lights, but in the 90s version only, the Xs were on flip cards), except in the 2016 version, where it was signified by a small image of their head in the first season and the panelist's name in the second season. Once all the votes were cast, the real person then revealed himself/herself by standing up by virtue of the host saying "Will the real (insert person's name) please stand up?". After the real person revealed himself/herself, the impostors told everyone their real names & occupations; then there was a brief chat (sometimes a stunt) to the real person. For each incorrect vote, the team of challengers won some money except in the 2016 version.

NOTE: In the current 2016 version, only three panelists were being used instead of four due to the ongoing Coronavirus/COVID-19/Pandemic issue happening in Hollywood.

Sometimes, a panelist would recognize or actually know one of the challengers, not necessarily the real person. If and when that happened, the panelist can disqualify himself/herself (later renamed recusal) causing an automatic wrong vote and giving the challengers money for that vote.

NOTE: So far, this has happened once in the current 2016 version of the show. Because of that, the panelist in question: Weird Al Yankovic has swapped chairs with Mama Doris.

In two of the versions (one of them being the original and the other the one in 2000) as well as the 50s pilot, the audience got in on the fun by making a vote themselves. The challenger with the majority vote got that vote. In case of a two-way or three-way tie, it worked the same as the panelist's disqualification; for that vote was considered wrong and the challengers picked up the incorrect vote value.

Here are the payoffs for the incorrect votes according to the version:

These are the elements that were being used in this version.

In the 2016 version, the third game of the show features the imposters from the previous game. As with the 1980 One on One, an additional fact is revealed, and the panel has to guess who it applies to.

The panelist with the fewest points is subject to punishment. In case of a tie, Mama Doris makes the final decision by choosing the loser.

For the first two seasons of the 2016 version, the one panelist who's done the worse of the four has to tweet a lie made up by host Anderson and post it for 24 hours.

In season three, the losing panelist became the subject of a "Fake News" story read by Anderson.

King of the Losers[]

In season four And five, the losing panelist, wears a crown, given by Mama Doris.

In season four And five, any panelist who guesses right in all five rounds, s/he receives a special trophy called "The Doris".

Celebrity Guests as Impostors in Disguise[]

Sometimes, the team of challengers would be in disguise, and one or two of them would be celebrity guests. Here are a few examples.

The 1969 and unused 1990 versions' themes had lyrics though the 90s version only used the instrumental version only.


You say you went home early last night
The book you read's out of sight
And that's why you took your phone off the hook
And never did get my call.

You don't know how to tell the truth…

A board game based on the original 1956 version was manufactured by Lowell in 1957. 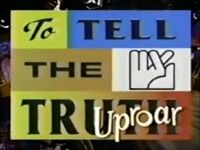 A single-player online game based on the short-lived 2000 version was once released by Uproar.com; However, as of September 30, 2006 the website has be temporarily shut down, offering no game show based online games of any kind. 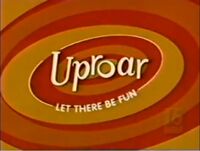 A live interactive version of Truth where you can play along while watching the show was once available thru GSN's very own website.

A video slot machine based on the syndicated 1969 era was released to american casinos nationwide by Bally Gaming Systems in 2002. (NOTE: on the slot machine glass you'll notice that there's a small 2000-2002 logo on the right side of the marquee seen below of this page.) 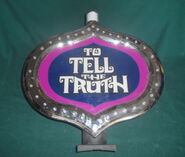 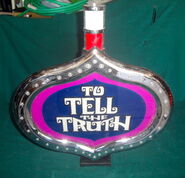 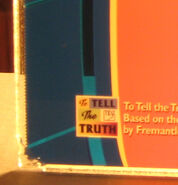 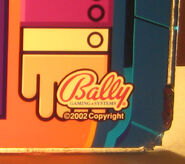 A To Tell the Truth DVD game was going to be released by Imagination Entertainment in 2005, but it ended up getting cancelled.

Countries that previously had their versions of To Tell the Truth include:

The short-lived Saturday Morning cartoon series titled Will the Real Jerry Lewis Please Sit Down (originally airing on ABC from 1970 until 1972) is a semi-reference to the show's catchphrase, "Will the real (insert contestant's name) please stand up?"

The 2000–2002 version of To Tell The Truth was the 1st game show where John O'Hurley and Burton Richardson both worked together on as both host and announcer respectively. Four years later, they worked together again in the 2006–2010 version of Family Feud.

Beginning in February 2010, Direct TV started a series of commercials spoofing To Tell the Truth (mainly based on the 1973–1978 era) featuring Alex Trebek (who hosted the actual show in 1991) as the host. A closely sounding instrumental variation of the 1969–1978 theme music was used. The four "panelists" (who were not celebrities unlike the actual show) were guessing who was "telling the truth" among the three contestants representing DirecTV, the cable company and DirecTV's rival, Dish Network. Although the "panelists" are clearly sitting. At the end, the "panelists" always chose DirecTV as the winner. (NOTE: The commercials are not entirely true to the show, as the contestants are shown standing up [the commercial open shows they are not sitting]).

The O'Hurley version was the last version that featured long-time panelist Kitty Carlisle before her death in 2007.

The O'Hurley version was the last to feature the classic Mark Goodson Production logo in the end credits but not the name and announcement said by Richardson.