Game Shows Wiki
Register
Don't have an account?
Sign In
Advertisement
in: People, Hosts, The Price is Right Hosts,
and 9 more

Tom Kennedy (born James Edward Narz on February 26, 1927 in Louisville, Kentucky, died October 7, 2020, in Oxnard, California) was a television game show host who had his greatest fame in the 1960s and 1970s. He was the younger brother of the late television host Jack Narz and the brother-in-law of the late Bill Cullen, and changed his name to avoid confusion prior to hosting his first national show, The Big Game, in 1958. Kennedy died at his home in Oxnard, California on October 7, 2020 at age 93.

On October 24, 2020; Buzzr did a marathon that payed a tribute of his passing which consisted episodes of: Body Language, To Tell the Truth (with Garry Moore) and Password Plus. 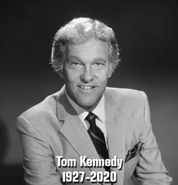