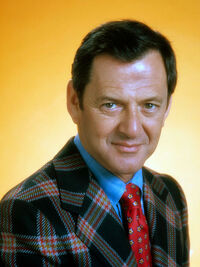 Anthony Leonard Randall (born Aryeh Leonard Rosenberg; February 26, 1920 – died May 17, 2004) was an American actor. He is best known for his role as Felix Unger in a television adaptation of the 1965 play The Odd Couple by Neil Simon.

In a career spanning about six decades, Randall received six Golden Globe Award nominations and six Primetime Emmy Award nominations (winning one). On a May 9, 1990, episode of The Tonight Show, he added, "This is my 95th time on this show."

On May 17, 2004, Randall died in his sleep, primarily caused by pneumonia from the coronary artery bypass surgery he received in 2003 at NYU Medical Center.