OPENING SPIEL #1:
"(insert opening question). The correct answer to that question could win one of the contestants (insert one of the two cars) or one of these other exciting prizes on Top Card! And now, here's the host of Top Card, Jim Caldwell!"

OPENING SPIEL #2:
"(insert two/three contestants from city, state, and occupation). (Today, they're here to face (insert returning champion's name), our returning champion, [who's won over (insert dollar amounts in prizes)],) (And) One of them could win this (insert name of car), or any one of these other outstanding automobiles on (the all-new musical) Top Card! And now, here's the host of Top Card, Jim Caldwell/Dan Miller!"

The game was played in three rounds with the same nine categories. The outer eight categories were entertainment categories while the one in the center was called "Wild Card", a category about anything.

Behind each category was a playing card. The player in control chose a category and then a toss-up question was asked. The first player to ring-in with a correct answer was shown the hidden card behind the category. Once the card was revealed, the player had a choice to make; either to take that card and add it to his/her score, or reject it and take the top card from a live deck in front of the hostess. If the top card was taken, the card revealed and the category covering it stayed in play, and taking the original hidden card took it off the board and took the category out of play (except the Wild Card category, each time a card behind it was kept, a new card replaced it and hidden behind the Wild Card).

A category would go out of play permanently when all the questions in that category were used up. After each choice, the player in control chose another category.

Here's how the contestants scored for each card:

Just like in regular Blackjack, the object of the game was to get to 21 or come as close to 21 as possible than any of their opponents without going over. Anything over 21 caused the contestant to bust and be eliminated from the round. To prevent busting, after taking a card, the player in control could decide to freeze on his/her current score.

There were no ties in Top Card, once a player froze on a number, he/she owned that number. The first player to freeze had the last chance to play if & when the other player(s) also froze. The last contestant to play had to continue giving correct answers and staying under 21 to stay in the game; one miss results a loss.

A round could be won by doing the following:

The winner of each round won a prize and advanced to the Championship Round.

Three contestants played this round, with the winner advancing to the Championship Round while the other players played Round 2.

Do you want the six from the board or take the Top Card?

Well... looks like you're going to get a six one way or the other.

Hey, an eight's coming around. So this means...

The two losers from Round 1 played this round. In Season 1, a Wild Card question was asked to determine control; for the rest of the run, a question from the category in the upper left was asked. Other than that, play was the same as the first round, with the winner advancing to the Championship Round to face the winner from Round 1.

The winners of the first two rounds faced off in the Championship Round, and the winner of this round won the game, became Top Card champion and earned the right to play Top Card Plus.

The Modified Game Board

Should be an easy choice isn't it?

Paige has a three of diamonds for you.

We have another 21 winner!
2-player mode

Top Card Plus (Bonus Round)[]

In Top Card Plus, the winner played for prizes, including a grand prize.

To start, the winning contestant chose what grand prize to play for in a blind draw from a special deck of cards. The grand prizes in the first season included a fur coat, a trip, a piano, or one of three cars. Then hostess Blake Pickett drew five cards from the Top Card deck to determine a starting bankroll. The total of the five card values was multiplied by $100 (Ex: 3♥, 10♣, 4♥, 5♦, K♦ x $100 = $3,200).

The Top Card game board replaced categories with eight prizes; each one had a price, and (as in the game) a hidden card behind them. The winning player chose which prize to buy with their bankroll, and the corresponding card was revealed. As in the main game, the contestant could keep that card and add it to their score, or take the top card in front of Blake.

After each choice, the player could elect to stop and take the prizes won up to that point, or continue playing in an attempt to reach 21. The "Wild Card" was still in play in this round. If it was chosen at anytime, the champion's remaining bankroll would be wiped out.

It should be noted that the money used in this game was not real money; that is, the player, if they stopped or won the game, didn't get to keep it.

If the contestant reached exactly 21, not only he/she kept all the prizes bought, but also won the selected grand prize.

Jim & winner Larry at the Top Card Plus podium

Larry's playing for the Isuzu Trooper

Meet the prize board.

With the rest of the cards, Larry's starting bankroll is $2700.

$2130 left and he's already in perfect position to win the car.

And he's done it!

For the rest of the show's run, Top Card Plus was played strictly for a car as the grand prize, chosen at random. The categories from the main game remained on the Top Card board, with a prize and a card hidden behind each one. Plus, the hidden cards were from the normal deck of 52. The winning player had up to four chances to win the chosen car. As in the game, the winning player chose a category, after which its prize was revealed. A correct answer won the prize, but an incorrect answer caused that chance to be dead. A correct answer also allowed the player to see the hidden card, after which (as long as it was not the Joker) the contestant could keep this card or take the top card in front of the hostess. Again, after each question, the player could elect to stop and keep the prizes won up to that point, or risk the prizes and continue playing. If the contestant busted or found the joker, they lost everything; if the player hit 21 in four tries or less, they won the selected prizes and the chosen car. The player still kept the prizes if they exhausted all four plays.

What's behind those doors?

Categories instead of outset prizes. BORING!

Pastor Jim has chosen Bee Gees; behind that is a $500 watch.

Pastor Jim answered the question correctly, so he gets to decide whether or not to take the 10 from the board...

But on the next move he got a Top Card Ace of diamonds...

Another Ace? What are the odds?

Pastor Jim doesn't want it, so decides to take the Top Card again. And if it's a 10 or face card, he wins the car. Is it?

You should be excited too, winning a new car.

Upon winning a car, the cast (plus loved ones) walk over to the just won new car.

This contestant Dawn finished with a great score of 20 after her four tries.

In either version, if the contestant found the joker on the first pick, the game did not end; instead, the player could still win a prize on the board by hitting 21. After selecting one of the remaining prizes, the card behind it was revealed; as normal, the player could keep it or get the top card. After this, the next cards from the deck were then revealed in succession. Once the player was in a position to bust, they could choose to stop and take $10/point if they wished, up to $200 (real money in this instance).

In all seasons, contestants stayed on until they won the bonus round or until defeated.

If you like to be a contestant on Top Card, Paige has the information for you on her special Top Card Card. 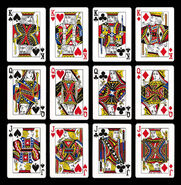 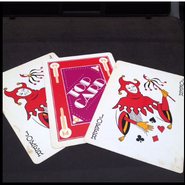 Card Back with 2 Jokers. 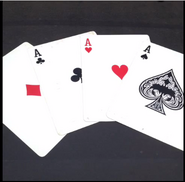 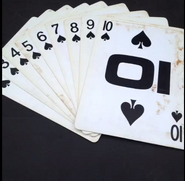 Top Card's Spades Court (All number cards in each court have 2 symbols and the number in the center, which makes these different from other card game shows and similar to the game cards in the board game Sorry!). 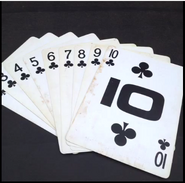 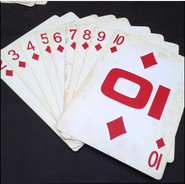 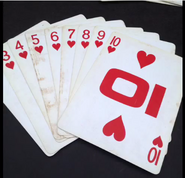 All face cards were designed by Hoyle. Even the Ace of spades.

That Ace is a Hoyle Maverick ace of spades.