PILOT #1 OPENING SPIEL:
GILBERT: "It's Top Secret! Here are the clues: 'I Can Get You Into Hot Water', 'My Ring Won't Fit Your Finger', 'Eventually, You're Bound to Pull My Plug' and 'I'm Your Rubber Ducky's Personal Pond'! The top secret answer is... GILBERT & AUDIENCE: "BATHTUB!" GILBERT: "From Television City in Hollywood, you can win over $15,000 in cash if you can conceal your identity on TOP SECRET! And now, here's the man with all the secrets, Wink Martindale!"

PILOT #3 OPENING SPIEL:
GILBERT: "It's time to play Top Secret! Here are the clues: 'I Can Get You Into Hot Water', 'My Ring Won't Fit Your Finger', 'Eventually, You're Bound to Pull My Plug', and 'I'm Your Rubber Ducky's Personal Pond'! The top secret answer is…" AUDIENCE: "THE BATHTUB!" GILBERT: "From Television City in Hollywood, you can win over $15,000 in cash if you can conceal your identity on.…" AUDIENCE: TOP SECRET! GILBERT: "...And here's the man with all the secrets, Wink Martindale!"

Top Secret was an unsold game show pilot where three players assume the "identities" of people, places and things, then try to conceal them from their opponents.

The object of the game is to guess the secret identities of the opponents.

Each of the three contestants were given a secret identity of a famous person, place or thing, along with four clues which talk about those identities. The clues were given a dollar value based on the difficulty of the clues: $250 for the hardest clue, $500 for the second-hardest, $750 for the second-easiest, and $1,000 for the easiest; so the higher the value the easier & less crazy the clue. To earn clues, the contestants must answer a toss-up question posed by host Martindale. While a question was read, a six-monitored randomizer with money values from $100-$1,000 was active; it stopped when a player buzzed-in to answer the question. A correct answer won the landed money amount, but a wrong answer eliminated that player from the next question. Now, the player who won the toss-up question used his/her score to buy one of the four clues from one of his/her two opponents; the player in control had three seconds to answer and if the controlling player can identify the identity of the player whose clue he/she bought, the player won $100 and the player with the identity was knocked out of the game.

The winner of the game was the one who was the last player standing or the player whose identity was not guessed after all of his/her clues were bought, and that player won the right to play the Super Sleuth round.

Can you guess Mike's identity from this clue?

What about this one?

Wendy certainly figured this one out.

Sorry Mike, but your secret's out. So your case is CLOSED!

In the Super Sleuth round, the winning player had 60 seconds (one minute) to identify six identities correctly. On each identity, three clues were given one at a time and the player must guess after each clue. Each correct identification was worth $200, and getting all six identities before time ran out won the grand cash prize.

Two games were played each show with the first Super Sleuth win being worth $5,000, and should any one player make it to Super Sleuth the second time on the same show, the payoff was $10,000. If no player won both games, the player with the most bonus round money supposedly returned as champion.

Can you solve this Super Sleuth puzzle in one clue?

Contestant Wendy didn't get six but instead got four, so she picked up $800.

Can Mike solve this puzzle in time? 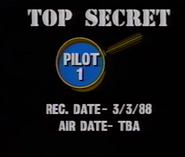 The men who produced this show.

Top Secret is a Martindale/Gilden Production!

A board game adaptation based on the proposed show was released in 1988 by Parker Brothers, referred to on the back of the box as "TV's cleverest new game show". However, the game only had a brief shelf life; this was partly because CBS turned down the show, but also because rival company TSR already had a game called Top Secret on the market. As a result, the Top Secret board game is a very hard-to-find collectible. The second board game that was based on a failed game show pilot was Smartass released by University Games.[1][2] 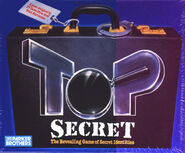 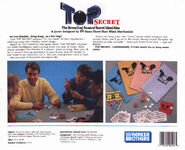 Top Secret was one of the shows that was being considered to replace Blackout while the CBS version of Family Feud with the late Ray Combs was being developed. After complaints from viewers of the Dick Clark version of The $25,000 Pyramid, CBS opted to renew Pyramid for a final run of 65 episodes.
The theme of the pilot is used as the introductory theme for all videos on Wink Martindale's YouTube channel, more specifically called "Wink's Vault".