Trashed was a short-lived MTV game show where contestants try to protect their personal items and eventually themselves from being "trashed" in any way.

Two teams of two answered pop culture/music video questions in order to score points and protect their six prized possessions they brought from home from getting trashed by the trasher.

To start, a toss-up question was asked to both teams and the first team to buzz-in with a correct answer won the right to choose which of their opponents items they would like to see trashed.

In the first two rounds, the team in control would which choose which of their opponents items they would like to see trashed. After that, a category was given and three questions from that category were asked. All questions were toss-ups and the first team to buzz-in with a correct answer scored points. For the team trying to defend their object from being trashed, they must answer two of the questions correctly to save their item; otherwise, the selected item was "trashed" in many ways by Mark the Trasher. When a category was finished regardless if the item was trashed or not, the team that answered the most out of three got to choose the next item of their opponents to trash.

Each team played three items each round, and they can only be played once whether they were trashed or not.

Each category consisted of three questions dealing with pop culture, music videos, or random trivia. On occasion, a skit would be presented, after which the contestants would have to answer questions about the skit or from the performers themselves.

NOTE: Most of these questions very often included bathroom or sexual humor; while commonplace for MTV, some of it was very clearly meant to test the boundaries of acceptable material on the network. This pushing of the envelope may go hand-in-hand with the experimenting with crudeness done on other relatively new MTV shows at the time, most notably Beavis and Butt-Head.

The demolition of prized possessions was carried out by Mark Fite, AKA "Mark the Trasher", with occasional help from Andrea Wagner, the model/announcer. Depending on the item being destroyed, this could be carried out in many ways:

Round 3: Survival Round (Lightning Round)[]

In the final round of the main game, instead of trashing contestant's items, they were trashing the contestants themselves. For one member from each team was "imprisoned", while their partners stood back at their podiums and answered questions. Each correct answer in this round was worth 150 points. The round lasted for an obscure time of 39 seconds and the team in the lead when time ran out won the game. The imprisoned contestant of the losing team ended up getting "trashed" in all sorts of ways. Examples included:

The winners moved on to the final round, while the losers left with a tacky parting gift such as a Simpsons chess set and were also required to do 10 hours community service (to go with the "trash" theme).

This bonus round was a cross between the Remote Control bonus round and the Winner's Circle round on Pyramid. The winning contestants sat face to face with three TV monitors behind each of them--one player with the odd-numbered monitors, the other with the even-numbered ones. Each one consisted of a music video. While alternating turns, one player would describe the artist in the video while the other tried to guess who the artist is. The time limit for this round depended on how many possessions they saved in the game. They started at 30 seconds, and they add five more for each item they saved. So if they saved all six of their personal items, they played the bonus round for a full minute (60 seconds). Players were not allowed to name any band members, titles of albums or songs; use any part of the band name; sing, hum, or whistle any part of a song; or recite any lyrics. If any of these illegal clues were given, that music video was taken out of play. If the team can get all six artists correctly in the time that they earned, they won a grand prize vacation. 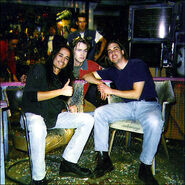 One contestant's experience
A Full Episode of Trashed