1987 Pilot Spiel: "Today, award-winning entertainer Ben Vereen and his daughter Naja will be trying to win money for their teammate, a retired salesman, Si Kirk. As they challenge television star Scott Baio, his mother Rose and their teammate student Melissa Baxter on TRIPLE THREAT! The exciting new game show about music, movies and television. And now, here's your host and the star of Triple Threat, Sam Riddle!"

Special: "From Hollywood, it's a special edition of TRIPLE THREAT! The hottest and most hippest stars today will be playing the exciting new game show about music, movies and television. Welcome from Family Ties: Tina Yothers, who will be trying to win money for her teammate Kevin Kennedy and his brother Bob. As they challenge Day by Day’s Christopher Barnes and his teammates Donna Barracannon and her best friend Stephanie Varooney. Those are our teams for today, and here is your host and the star of this very special Triple Threat, Alan Hunter!"

1992 BET Series: "It's B-E-T's TRIPLE THREAT! The slamming new game show about movies, music and television. And here's the man, your host and star of Triple Threat, Spencer Christian!"

The two teams in this version consisted of one celebrity guest, his/her relative, and a civilian contestant who played for cash. In all rounds, a song was played, and three toss-up questions connected to the song were asked. Each question had four possible answers which were revealed one at a time. A player could buzz-in and guess at any time, but could only choose from the answers that had been revealed up to that point. A correct guess won money for the team, while a miss cost them money and allowed the opposing team to see all four answers before guessing. A team also lost money if they buzzed in before any of the answers were revealed, which also allowed the opponents to see all the answers. There was no penalty for an incorrect answer on a free guess.

In the first two rounds, one player from each team representing his/her own generation competed against each other. In the first round, the songs played came from their own generation and correct answers were worth $50 each, while in Round 2, the songs were from out of their generation and correct answers were worth $100 each. Three songs were played in each round, with one song per pair of players.

The final round of the game was the "Free for All" round, so called because all six players, equipped with their own buzzers (as opposed to using the same one in the pilot), played this round and could buzz in on every question. A series of songs were played within a set time limit, with three questions per song worth $200. When time expired, the team with the most money won the game and advanced to the "Triple Threat Relay Round". If the game ended in a tie, one final question was played, and the team that buzzed in with the correct answer won the game. If they were wrong, the opponents automatically won; however, they still received a free guess.

The Triple Threat Relay Round was a bonus round played just like a relay race, using a game board with 15 spaces divided into five columns.

The team was given a short piece of information about three artists spanning three generations, whose names were placed at the top of the center three columns. The far left and far right columns were marked "Out of Play." Once the three members decided the order in which they would run the relay, a 60-second clock started as the host revealed a song title on a placard and handed it to the first member. That person had to run to the board and place it in the column for the appropriate artist, or in "Out of Play" if they thought it did not match up to any artist. Once the title had been placed, that member returned to the back of the line and the next one received a new title. Each artist was represented by three titles, while four others needed to be put "Out of Play," for a total of 13.

Team members were encouraged to shout advice to each other, and the one at the board could reposition one title if he/she thought it had been incorrectly placed. The chase lights above a column illuminated once all three of its titles were in place. If the team correctly filled the columns for all three artists before time ran out, their winnings from the main game were tripled. Otherwise, they received an additional $100 for every title correctly placed in the artists' columns.

The rules and game layout differed slightly in the pilot. The board had only one "Out of Play" column, at the far right, and it had space to accommodate six titles. A total of 15 titles were used, three per artist and six others.

Gameplay was basically the same as the original version, but not without a few changes made to the format. There were no longer celebrity guests on the teams; civilian families of three competed. In addition, the game was played for points & prizes instead of cash, and the winning family returned as champions to compete on the next show. Also, incorrect answers caused all of the answers or the remaining answers to be immediately revealed. Having aired on BET, this version focused more on Black-oriented music, TV shows, and movies. Finally, it was not just regular songs that were played; music videos were, too.

One member of each family representing their generation played each song. Correct answers added points (5 in the first round, and 10 in the second), while incorrect answers lost points and gave the opposing team a chance to answer from the remaining choices.

Using the same rules as before, all family members equipped with their own buzzers competed in the "Free for All" round, with each correct answer being worth 20 points. When the time was up at the end of the round, the family with the most points won a prize package and advanced to the Triple Threat Relay Round.

Aside from cosmetic changes to the board, the Relay Round was played the same as in the original version. On some episodes, players had to match movies to actors appearing in them. Correctly guessing all nine songs for all three artists won trips to both Disneyland in Anaheim, CA and Walt Disney World in Orlando, FL. Winning this round also caused the winning team to retire from the show.

During the last week of this version, a Tournament of Champions was held; the winners won a trip to the Euro Disney Resort (now Disneyland Resort Paris), while the second place family won a trip to Walt Disney World.

These are the stations that carried the syndicated version of Triple Threat.

This was the last game show hosted by Jim Lange.

MTV VJ Alan Hunter sub-hosted the show in which the contestants & celebrities were all young people. In that day's Round 2, music videos were shown, but only two questions were asked instead of the usual three; the value remained the same. When the final round, the Three-For-All round, ended, instead of the Family Feud win bell, the time's up signal from Whew! sounded. In that day's bonus round, the players had to match movies to actors appearing in them. 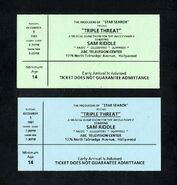