Trivial Pursuit was an American game show loosely based on the board game of the same name.

The show was played in two halves. The first half was an interactive game show while the other half was a traditional game show.

Nine players (originally twelve) competed for three spots in the second half of the show.

Five questions with four multiple-choice answers were asked by the host. The players had 10 seconds to answer by pressing a number from 1-4 on a keypad in front of them. They scored points based on how fast they answered the question correctly, with a maximum of 1,000 points available. After five questions, the six players with the highest scores played Round 2 and the other players were eliminated.

This round was played in the same way as Round 1, except the three highest scoring players won a special prize and a chance to play Trivial Pursuit in the next half hour show.

As in the board game, three contestants raced to complete their game pie first by answering questions from categories that match the colored wedge. Unlike the board game, however, it took two questions to complete a wedge, and no board or die was used. Also, although most of the colors were the same, one was different and that color was red, replacing the brown-colored wedge.

In the first three rounds, each player received two turns consisting of a category choice followed by a question posed by host Martindale. A correct answer lit up a wedge but an incorrect answer gave the two opponents a chance to steal the wedge.

In the first round, the six traditional Trivial Pursuit categories (ie. those from the "Genus" Editions of the games) were used.

This round used either the categories from the Movie Edition or Television Edition.

In the second half of Round 2 (later known as Round 3), a new set of categories were played. (In early episodes, the questions related to a certain year in history.) The category sets used were different each show, and were borrowed from multiple versions of the board game.

This round also included three special questions known as "Bonus Questions" hidden behind three of the categories--one in one half of the round, and two in the other. When chosen, the player who answered an audio or video question correctly had an opportunity to answer a follow-up question which awarded the player a $100 bonus and another half-wedge in the color of their choice.

The final round again used the traditional basic categories as in Round 1, but the round was played in a different manner. The round started with a toss-up question, and the first player to buzz-in and answer correctly controlled the round. The player in control kept choosing categories and answering questions until he/she either filled his or her pie (thereby winning the game), or missed a question, at which point the other two players could steal control and the wedge. If nobody answered the question, another toss-up was played. The first player to completely light up the entire pie won the game, $500, an additional prize and played the bonus round. But if sometime later during the final round, a warning sound would signal that there was one minute left to play in the round and if neither player had completed their pie when the one minute expired (signified by a buzzer), then the player with the most lit wedges won the game.

Bonus Round: The Trivial Pursuit Challenge Round[]

The winning player had 45 seconds to answer six questions (again from the six basic categories) in order to fill up a pie shown on a monitor. Each correct answer lit a color in the pie. A wrong answer or a pass automatically moved to the next category. After the first six questions, the player went back to questions from the categories missed as time permitted (later episodes observed that the categories continued in sequence even if a question was already answered in that category). The winning player received $100 for each wedge lit, and if he/she lit up all six wedges before the 45 seconds expired, he/she won $1,000 and a trip.

If there was extra time at the end of the show, an audience member was called on stage and given the opportunity to answer five multiple-choice questions (much like the "Interactive" portion of the show) at $20 apiece, for a maximum payoff of $100.

In the pilot made in 1993 for the syndication market, the contestants played for money in addition to lighting up wedges in their pies. Correct answers added money to his/her score plus a lit wedge in his/her pie, while incorrect answers subtracted money from his/her score. Also completing the game pie earned the right to add more money to his/her score, by answering a special bonus question from a category chosen by Wink. Prior to the question, the player in control wagered any or all of his/her current dollar total. After the question, his/her pies was reset and the game went on from there. There were three rounds of gameplay with the round one questions worth $200, the round two questions were worth $300 and the third round's questions were worth $500. Also for the first two rounds, each one started with a toss-up question, and the first player to buzz-in and answer correctly controlled the round. The player in control kept choosing categories and answering questions until he/she missed one, prompting the other players to steal the money and control and if all three of them miss, another toss-up was played. The third round has all the questions be toss-ups. Each of them ended at the sound of the buzzer (meaning time was up). The Trivia Challenge (referred to as "The Ultimate Trivia Challenge") was played for a trip only (in this case it was a 2 week European cruise worth more than $10,000). Not only that, the bonus pie was superimposed rather than on a monitor.

A question would be shown on the screen, along with four choices, and the answer would be revealed 10 seconds later. Home viewers were given an opportunity to call a special 1-900 number ($4.98 per call) and play a "TP: Interactive Game" typed, using a slightly modified scoring system, and players answered by using their touch-tone telephone. The winner of each "playbreak" won a prize and competed on Friday in a playoff game against the other winners for a vacation. The ad would last about 100 seconds, as seen by an on-screen clock (even though the clock read ":99" as it faded in).

On New Year's Day 1994, all of the weekly playoff winners up to that point were given the opportunity to compete in a "Tournament of Champions"-style grand playoff for a new car, which aired in between a Trivial Pursuit marathon FAM was running that day.

Trivial Pursuit proved popular in its initial airing during the summer of 1993, as The Family Channel's ratings vastly increased during the 12:30-1:00 pm time slot. MTM Entertainment, an independent distribution company owned by the network's parent organization, International Family Entertainment, planned to syndicate a new version of the show to local stations for the 1994-1995 season. The plan was to produce 130 new episodes and air them along with the 130 episodes already taped for The Family Channel. However, efforts to interest local stations were largely unsuccessful, and the syndicated version never materialized.

Other interactive games aired on the network – a board-game adaptation of Boggle, the list-oriented Shuffle, and an adaptation of the newspaper game Jumble. Trivial Pursuit: The Interactive Game was cancelled on March 4, 1994[1] to make way for Boggle and Shuffle, only to return on September 7[2] and be cancelled again on December 30,[3] along with the entire interactive game block. However, reruns of Trivial Pursuit: The Classic Game continued with no interactive playbreaks until July 21, 1995.

A board game called Trivial Pursuit: Game Show, with some questions from the show, was released by Parker Brothers in 1993, featuring host Wink Martindale on the cover which features pics from the pilot. and just like TV Scrabble in 1987 by Selchow & Righter, it was originally a board game itself. Gameplay was similar to the aired version. 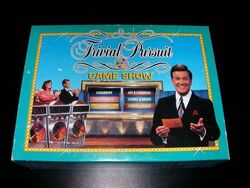 This is what a contestant's pie scoreboard looks like.

This game pie was seen in the show's logo and on one of the monitors during the Trivial Pursuit Challenge Round.

The idea for a game show version of Trivial Pursuit was planned long before this version occurred. In 1987, two pilots for an earlier version were made. They were produced by Jay Wolpert Productions and distributed by Worldvision Enterprises (which owned Hanna-Barbera cartoons at the time). The hosts for the pilots were Steve Morris & Linda Marr. It had contestants race to the hub (the center of the Trivial Pursuit board) by answering questions, lighting wedges in the "game pies" on their consoles, which could be spun to try and land on a lit wedge to automatically win the game. The winner went on to zap out his/her opponents' wedges to win $10,000 in cash & prizes.[4]

Based on the board game of the same name originally by Selchow & Righter-Horn Abbot, later Parker Brothers, now Hasbro.

Michael vs. Dan vs. Craig (with Interactive Game and Playbreak included)
The unsold 1993 pilot