"From the spectacular Trump Castle in world famous Atlantic City, it's time to play (the $100,000 championship on) television's non-stop game of knowledge…TRUMP CARD! And now, here's the star of Trump Card, Jimmy Cefalo!"

Trump Card was a year-old game show where three contestants answered questions to fill-up their own bingo-like cards. This was an adaptation of the British game show Bob's Full House. Keep in mind that this should not be confused with the 2020 political documentary film of the same name.

The object of the game was to mark off numbers on their bingo card, or in this case, their "Trump Card".

In this round, the players competed to cover all four corners of their cards by answering questions from four different categories, each of which had four questions. One player would choose a category, then a question from that category was asked. The first player to buzz in had a chance to answer. A correct answer covered a corner number on the card, and earned the right to choose another category, but an incorrect answer locked that player out of the next question. This was indicated by the uncovered numbers blacked out on the card. Whenever that happened, the next question came from the next category in line.

The first player to cover all four corner numbers won $750.

The object of this round was to complete the entire center line. This time there were four new categories, each with five questions. Before the round started, each player was given a very special Trump Card, which was a single card marked with a "T". At any point during the rest of the game, one player could use that Trump Card to stop another player's progress (this was classified as getting another player "Trumped"). A player could only play his/her Trump Card after giving a correct answer. As soon as the card was played, the player who was "Trumped" had a "T" marked in front of his/her podium in place of his/her Trump Card. To get out of being trumped, that trumped player had to answer one question correctly, though there was a ½ second delay in buzzing in.

In this round, all three players competed to fill-up their entire Trump Card (mark off the rest of the numbers). Jimmy classified this as a "Flash Round." This time, there were no categories in this round; all questions were general knowledge. If any of the players hadn't used their Trump Cards yet, they were carried over into this round. The first player to fill-up his/her Trump Card won the game. If time was up before that happened, the closest non-trumped player to doing so received the money; but if the game ended in a tie, a series of tiebreaker questions were asked for the win. The winner of the game received an additional $3,000, plus a chance to play the Trump Card bonus round for $10,000.

The way the payoffs were structured & offered, one player could win up to $5,250. Any contestant who does not win any money in the front game left with consolation prizes.

This bonus game had similarities to the bonus rounds from other game shows, Blockbusters’ Gold Rush/Run, The Super Jeopardy bonus from the 1978 revival of Jeopardy!, Catch Phrase’s Bonus Game, and Wordplay’s Double Definitions Round.

The winning contestant faced a giant 25 numbered square game board. The object of the bonus was to get five-in-a-row in any direction, either across, up & down, or diagonally in 45 seconds or less. To start, the winning contestant pulled a Trump Card from a deck of 25 numbered cards, and the number chosen was immediately covered on the board, in other words it acted as a free space. Should the player win the game without using the special Trump Card, he/she won a bonus trump card choice/bonus free space. Now the player had 45 seconds to get five-in-a-row by answering questions correctly. The winner picked off numbers, and heard questions posed by host Cefalo on each number. A correct answer covered the chosen number, but an incorrect answer or a pass put a block up, and the contestant had to work his/her way around it/start a new route. If the winning player could make a line of five-in-a-row before time ran out, he/she won $10,000. If the winning contestant won with a hat trick in the main game and won the bonus, that player could win a maximum of $15,250.

During the show, members of the studio audience were each given their own Trump Cards of 15 numbers. Whenever a question was answered correctly, the audience members marked off their corresponding numbers. Meeting the requirements in each round was worth $10, so each audience member could win up to $30.

Toward the end of the show's run, the 21 Bonus Round winners with the best records on cash accumulated and/or time it took to win the Bonus Round were invited back to play for $100,000. The following changes were made for the tournament:

Based on the British game show Bob's Full House by Terry Mardell and David Moore.

The following are a list of countries that have previously aired their versions of Trump Card including: 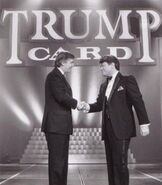 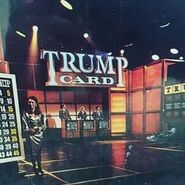