Twenty One was a Q&A game show where contestants were placed in isolation booths had to get to 21 before their opponents. This show was also known for starting the infamous 1950s "Quiz Show Scandals" at the time.

Two contestants (one a champion, the other the challenger), were both placed in isolation booths, wearing headphones so they cannot hear or see the other's score or progress. Plus, they couldn't see the audience due to the arrangement of the lighting in the studio.

The object of the game was to score 21 points as fast as you can, or come closer to 21 points than the opponent.

The game was played for up to five rounds. In each round, a category was given, each category has eleven questions of increasing difficulty, they ranged in value from 1 to 11 (one point being the easiest, eleven being the hardest). So any contestant can reach 21 in as few as two rounds. Each contestant in turn (starting with the challenger) with the other's booth turned off, decided how many points to play for, and then a question worth that value was asked by the host. A correct answer added the chosen point value to the player's score, but an incorrect answer subtracted the chosen point value from the player's score (the scores can never go below zero). After the first two rounds, both players' booths were turned on though they still don't know each other's score and they were now given the option to stop the game, but they must stop only if they think they're leading. That's important, because when the game is stopped voluntarily, the player with the most points at that point wins; if they didn't decide to stop the game, the game continues. On games when they didn't stop voluntarily, the first player to reach 21 points won the game. Should the challenger reach 21 first, the champion who has a score of 10 points or more was given one last chance to catch up and take the game to a 21-21 tie or save more money (which will all be explained later); the challenger's booth was left on during that time to make sure he/she can hear everything going on.

Winning players won money for the game just won. In the 1950s version and 1982 pilot, winning contestants won money according to the margin of victory. Money won by the challenger was taken out of the champion's total winnings; that's why before each game, championship players always get a decision to either play that next game or retire from the show.

This version was notorious for being one of the many game shows of its kind to be a part of the 1950s quiz show scandals, the first of which was Jack Narz's Dotto. It was exposed to the scandals because of the fact that many of the contestants were briefed on how they should act and were given answers in advance. This all came about because two contestants playing the very first game on the very first show didn't do so well.

The man in the center of the scandals was the show's big time champion Charles Van Doren, a college professor. He first came on the show on November 28, 1956, his first contender was then-current champion Hebert Stempel who won $69,500 at the time. They played five games together, and, on the fourth game, Herb had a chance to win his next match; what the viewers didn't know was that Stempel was forced to lose by executive producer Dan Enright. The question on which he answered wrong was a five-point question in the category of "Movies and Movie Stars", and it went like this: "What film won the Academy Award for Best Picture in 1955?" Stempel knew it was Marty, which was one of his favorites, but he was forced to answer On the Waterfront, which won the same Academy Award the year before. This caused Van Doren to beat Stempel in the next round except Stempel came through and brought the game to a fourth tie. Van Doren won the match on the fifth game with a score of 18-10 giving him $20,000 from Herb's total which was dropped to $49,500. During his time on Twenty-One, he appeared as a regular on NBC's Today Show. On March 11, 1957, he was finally defeated by a lady named Vivienne Nearing; his final total was $129,000.

In frustration, Stempel squealed on the grand jury about the whole thing. Van Doren's little secret was finally exposed when he appeared before a House hearing and confessed to being given the answers. Twenty-One was cancelled at last on October 17, 1958; taking its time slot was a more successful and "puzzling" game show Concentration which Jack hosted and produced up until that point.

Barry & Enright wouldn't produce another game show together for over a decade. But in 1969, Jack Barry returned to television by hosting The Generation Gap (replacing original host Dennis Wholey) for ABC, and then two years later hosted and produced The Reel Game for the same network. Over a year later, on September 4, 1972, Jack Barry became a star once again by hosting and producing The Joker's Wild for CBS after it had been in four years of development. (The other shows that premiered on that date were The Price is Right and Gambit.) Barry rehired Dan Enright as executive producer in early 1975 and reformed Barry & Enright Productions soon after the show's cancellation.

These fateful incidents became legendary, and they even inspired a 1994 movie called Quiz Show, directed by actor Robert Redford.

Barry & Enright had the idea of reviving 21 for the syndication market (as they did with The Joker's Wild and Tic Tac Dough). So they produced a pilot for the show in 1982, with Jim Lange (who just finished his two-year hosting duties on another Barry & Enright game show called Bullseye) serving as host (it would have been the third game show where Lange did not wear glasses). The pilot didn't sell.

In this version each category had nine questions instead of eleven, so they ranged in value from 1 to 9 points; still, the higher the point value, the more difficult the question. The 8 and 9 point questions gave the contestant additional thinking time (like the "Center Box" Question on Tic Tac Dough). Also, the value was doubled to $1,000 (plus that amount for every new game in case of a 21-21 tie game) multiplied by the margin of victory. The biggest difference was the addition of a bonus game which used the traditional "avoid the bad guy" format, but in a different way.

The champion faced a board of random shuffling numbers ranging from 1 to 11, and was given a remote control to stop the shuffling. The object of the bonus game was to get to 21 or come closer to 21 than the "computer" without going over, and anything over 21 was a bust (a la blackjack). On each turn, the champion would decide to either take the number he/she would land on or give it to the "computer", after which he/she stopped the shuffling. Whatever number it landed on was added to that player's score. The computer could keep building its score until it hit 17 or more, but this rule did not affect the contestant. If the contestant could beat the computer in any way, he/she won $2,000 in cash and a $3,000 trip (in this case, to Tahiti).

Twenty-One finally made its return to NBC in 2000 after 42 years of nonexistence. The new host for this version was talk show host Maury Povich; it returned due to the wake of big money game shows thanks to Who Wants to Be a Millionaire?.

The game was basically the same as the original but with these exceptions:

These amounts accumulated, and in this payout structure, winning four games would be worth at least $1,000,000. After defeating the fourth opponent, the contestant started again from the beginning of the chain (i.e. the champion would win $100,000 if he/she could defeat his/her fifth opponent, $200,000 for defeating his/her sixth, and so on).

Starting from the 7th episode of the show (aired on February 9, 2000), the prize ladder changed to the following:

In this payout structure, winning seven games would be worth at least $2,675,000. As before, any contestant who defeated the seventh opponent started again from the beginning of the chain (i.e. the 8th game would be played for $25,000; etc.).

Upon the champion's defeat, the money he/she won was handed to him/her in cash. One of the models walked in with a silver-plated platter with cash totaling the champion's winnings. The money was placed into a bag with the show's logo and NBC peacock on it (unless the amount was so large that it wouldn't all fit in the bag; instead it had to be carted out).

The winner of each game went on to play a new bonus game called Perfect 21. Povich read up to six true/false questions of increasing difficulty under a specific category. Each new question increased the point value, starting with 1 point, then 2, 3, 4, 5, and finally 6 points. Each point was worth $10,000 so the maximum total was $210,000. If the champion missed any question along the way, the bonus money was lost, which is why he/she was always given the option to stop the game and keep whatever they won and add it to the current winnings. No player ever got the full $210,000 by getting all six right, although one player (Tim Helms) came very close; in fact, he answered five of the six questions right, but he refused to go for the hat trick and chose to keep the $150,000 he did score; after the break, Povich asked the final question to Helms just for fun.

During the first six episodes, the audience chose the winner's next opponent. The audience would be presented with two potential challengers to face the current champion, and the audience would vote for an opponent using keypads. The person who received the higher vote played against the champion; the other person would be one of the two potential challengers to be voted on for the next game. In the first episode, there were three potential opponents to face the champion. After the sixth episode, the process was changed to a random selection. At the beginning of the show, six potential challengers would be introduced, and would be selected randomly from that group for each new game. People who had not been selected by the end of the show were not guaranteed to return on the following show, although some people did appear on the show multiple times before being selected to play.

Countries that have done their own versions of Twenty One include: 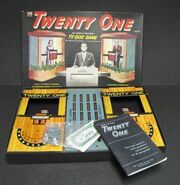 Pyramid (1958)
The slim paperback has one to eleven point questions in each of the forty-five categories.

The orchestra in some of the early episodes of the 2000 revival. 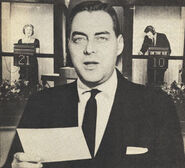 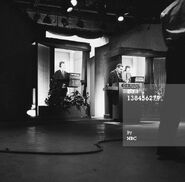 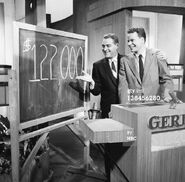 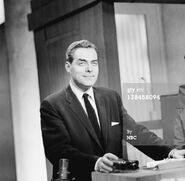 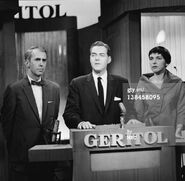 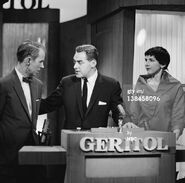 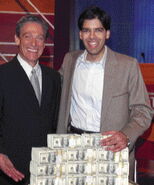 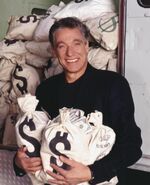 A button letting the viewers know that the Quiz Scandal stopped.
The Movie Quiz Show 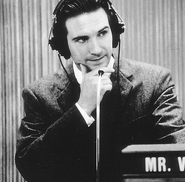