She was a struggling actress during the 1970s and in 1980 was a contestant on The Price is Right but never made it out of Contestants' Row. It seemed like her career was nothing but a dead end, until she learned that producers were holding auditions for the new letter turner on Wheel of Fortune by her friend Janet Jones (aka Mrs. Wayne Gretzky). The letter turning job was formerly occupied by Susan Stafford. On a whim, Vanna tried out for that job thinking that she may or may not get it; on her audition, however, Vanna was a nervous wreck, quivering & shaking, but producer/creator Merv Griffin saw through the nervousness and hired her for the job partnering with current host Pat Sajak. Vanna's first show was on December 13, 1982. Her popularity heightened thanks to the nighttime version and she has stayed with the show ever since. 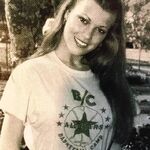 Vanna White with Pat Sajak as Avatar figures from the Wheel of Fortune for the Nintendo Wii.