What's My Line? at 25 was a 90-minute special celebrating the show's 25th anniversary at the time.

Just prior to the demise of the syndicated version in September 1975, the special was presented as part of ABC's Wide World of Entertainment late-night package that aired at 11:30 PM ET weeknights at the time, which also included among other shows, concert specials from Dick Clark, reruns of The Movie of the Week, and The Dick Cavett Show.

The special consisted primarily of clips from the original 1950-67 CBS version, with a clip from 1973 during the Arlene Francis montage segment (which was in black and white). 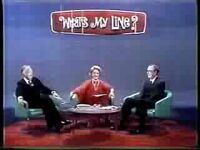 Page about the special
Page @ What's My Line? Wiki

Retrieved from "https://gameshows.fandom.com/wiki/What%27s_My_Line%3F_at_25?oldid=203673"
Community content is available under CC-BY-SA unless otherwise noted.