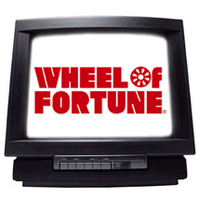 Though it has been given different treatments as technology progressed, the basic logo of Wheel has stayed the same, right down to the font.

Starting in August 1983, the logo was placed over a top-down view on the Wheel. That's much better!

This is a chyron version of the previous logo. The spaces on the wheel are now filled in with white. This version comes in a variety of fun colors.

This computer-generated logo was used before the introduction of Pat (or Rolf) in the mid-late 1980s. 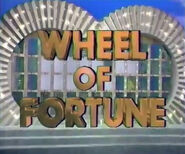 The spiffy-for-its-time fully computer-animated Wheel logo used from the late 80s to the early 90s, in both the daytime and syndicated versions.

Not to mention, the wedges from the Wheel come alive in the intro thanks to computer animation as well. Used as Wheel celebrated its 10th Anniversary (and continuing into Season 11); it's appropriate, as an occasion as festive as this brings out the party atmosphere, as seen by a hanging disco ball at the top. 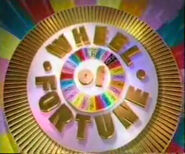 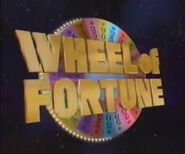 This logo was the one used in the famous "spaceship" opening from 1993 as an alternate logo for Season 11, it became regular in Season 12.

Cartoon Pat and Vanna ride in their Wheel spaceship soaring into our lives! 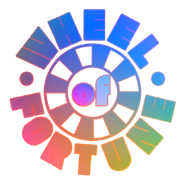 This alternate version of the logo had rainbow hues and was used in the full credit crawl during Season 12 (1994-1995). 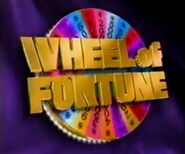 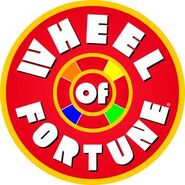 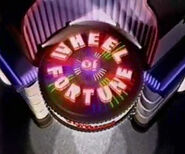 This is the impressive "marquee" intro from Season 16. It looks similar to the 1992 opening. The UK version of the time used this same opening as well.

The studio entrance doors. "Stage 11" on the right refers to where they tape, while on the left is the Columbia-TriStar Television logo. 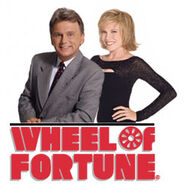 Logo in silver As Seen With Pat Sajak And Vanna White. Seen On The Poster 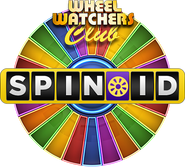 Christmas Logo
Add a photo to this gallery

Toss Up Wipe (Celebrity Wheel of Fortune; primetime 2021-present)
Add a photo to this gallery
Retrieved from "https://gameshows.fandom.com/wiki/Wheel_of_Fortune_(2)/Logo_Styles?oldid=231809"
Community content is available under CC-BY-SA unless otherwise noted.