Game Shows Wiki
Register
Don't have an account?
Sign In
Advertisement
in: Puzzle, Word Games, 2 out of 3 match,
and 15 more

This is chronicling the short-lived game show Whew! (later known as Celebrity Whew!), which was a game of close calls, narrow escapes and split-second decisions where contestants competed to correct "bloopers", factual statements in which the ending part was purposefully miswritten for humorous effect.

Whew! originally featured two contestants (one of whom was usually the show's reigning champion) competing in a best two-out-of-three match by correcting bloopers relating to specific categories, a different one for each round. The main portion of the game was played on a six level game board containing a total of twenty-eight squares and each square had a hidden blooper behind it: level six (the top level), contained three squares worth $200, $350 and $500 respectively, whereas the remaining five levels each contained five squares worth $10 to $50 (in increments of $10).

In each round, one contestant acted as the "charger" while their opponent acted as the "blocker". At the beginning of each new game, both contestants were told the categories for both rounds and then the challenger was given the option of blocking or charging (in the case of a retiring champion, a coin toss determined which of two new contestants had this option). In either case, the charger went offstage to a soundproof isolation booth while the blocker placed six blocks on the board, which acted as five-second penalty boxes (the blocker could place only one block on level six and no more than three blocks on any one of the remaining five). After the blocks had been placed, the charger then returned onstage and then had 60 seconds to work their way from the bottom of the board (level one) to the top (level six) by correcting one blooper per level. On each level, the charger selected a square by calling out the level number and money amount (ex: level six, $500) and if it was not blocked, then Kennedy would read out the blooper in its entirety with the miswritten ending underlined (ex: "A favorite accordion song goes 'Lady of Spain, I Abhor You.'" Correct answer: Adore). The charger was to correct only the underlined portion of the blooper, but only after it was completely read; if he/she did so, they got to move on to the next level. If he/she gave an incorrect answer or failed to answer within three seconds, he/she then had to select another square on that same level and if it too was unblocked, the same rules applied as before. However, if the charger selected a square that the blocker had blocked, he/she had to wait five seconds before charging again. If the charger used up all the squares on any one of the first five levels without a correct answer, then he/she got to move on to the next level. If the charger cleared all six levels before time ran out, then he/she won the round; otherwise, the blocker won. The blocker also wins if the charger exhausts the sixth level without correcting a blooper.

If the charger saw that time was running short and he/she had not yet reached level six, he/she could then call a "Longshot", which not only stopped the clock, but also moved the charger up to level six. However, the catch was that the blocker then got to place a secret block on that level in addition to a block that he/she may had placed there while the charger was offstage. After the secret block was placed, the charger then selected one of the three squares on level six and attempted to correct its blooper if it was not blocked; if they did so, they then won the round, but if they did not or selected one of the squares that was blocked, then the blocker won the round. The charger could not call a Longshot on level six or during the five-second penalty for uncovering a block, but could do so at any other time (even while Kennedy was reading a blooper).

Both contestants switched jobs in round two, and the first one to win two rounds won the game and advanced on to the Gauntlet of Villains for a chance at $25,000. In the case of a tiebreaker, the category for that round was revealed and the reigning champion (or the loser of a coin toss in the case of two new challengers) had the choice to either charge or block. The winner of the game wins all the money earned from charging and blocking. The loser goes home with a consolation prize. If the loser was an outgoing champion, he/she leaves with the money amassed from previous games.

A round in progress from the pilot, featuring a noticeably different clock and podiums.

A block is hit in the pilot.

Bloopers on the pilot had the potential to be confusing due to the lack of underlined words or phrases.
The Series

The first board being revealed to the contestants on the aired series.

Blocks being placed on the board.

An example of a Blooper.

Three blocks are hit on the third level and only one second remaining, so it makes sense to call "Longshot" here.

But here's better news, Howard Wilson just made it to the top and won the round. This is what a Charger's arrow looks like close-up.

A round in progress from Celebrity Whew!. Can you figure out the correct answer? Can Betty White and her contestant partner?

From Celebrity Whew!, the "random" placement of blocks by the "villains". Looks like they were being extra-cheeky today...

The Gauntlet of Villains[]

The Gauntlet of Villains was a line of ten wooden caricatures of stereotypical villains, each of which had a small television monitor embedded in its chest (a "telly-belly") and a metal mechanical arm acting as a gate-like barrier. Their names were as follows:

To win the $25,000, all the champion had to do was to get past all ten villains by correcting ten bloopers, one per villain. He/she was given a base time of 60 seconds plus one additional second for every $100 he/she won in the main game to clear the gauntlet in the above order (ex: if the champion won a total of $1,000 blocking and charging, then he/she got an additional 10 seconds added to the base time for a total of 70 seconds). For each villain, Kennedy would read a blooper and the champion had two seconds to correct it. If he/she did so, the villain's arm would drop and he/she would then move on to the next one. If he/she gave an incorrect answer or failed to answer at all, the correct answer was revealed in the villain's telly-belly and a new blooper was read (this process continued until the champion corrected a blooper for that particular villain).

The champion got $100 for every villain cleared or $25,000 if he/she cleared all ten, whichever came first. If the champion won the $25,000, he/she was retired as an undefeated champion, per CBS's cap winning limit; otherwise, he/she returned to play against a new challenger in another game. By August 1979, a new rule was added in which contestants were also retired if they won five games in a row.

The Gauntlet of Villains from the show's pilot.

The bonus round in progress. Unlike the aired series, the arms of the caricatures did not move.

The Gauntlet from the aired series.

Before the round started, a humorous taunt would be shown on one of the monitors.

The bonus round in progress. This contestant Randy Amasia is halfway through the Gauntlet.

This contestant, Gwendolyn Brown, made it to $25,000 just in the nick of time.

What happens if a contestant doesn't make it in time.

A hysterical contestant, Carrie Fedora, hugging the caricatures after winning the bonus round. The villains "taunted" in win situations as well.

In Celebrity Whew!, the contestant had the option of choosing whether to try and make it through the first five villains, then pass control onto the celebrity, or vice-versa.

Effective November 5, 1979, Whew! was changed to Celebrity Whew! in an effort to boost the show's ratings. The game was now played with two celebrity-contestant teams, and the rules were basically still the same as before, but with some changes. Now, team members shared blocking and charging duties (for teams that were blocking, both the celebrity and their contestant partner got to place three blocks each on the board), and in the Gauntlet of Villains, each member of the winning team took on one half of the gauntlet respectively (the contestant partner had the option of taking on the first five villains or the last five). During the show's final weeks on the air, if the winning team won 2-0 by clearing the board in each round, then they got to play the tiebreaker board unopposed with a randomly generated set of blocks. 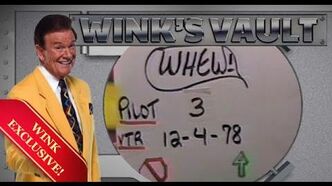 Pie in the Sky - An unsold pilot that was also created by Jay Wolpert and announced by Rod Roddy which also featured trivia "bloopers" hosted by Bob Goen in 1984.