FORMAT #1 SPIEL:
"You can double your money with every word, and you may win over $100,000, or you may go broke. The decision is yours! This is Winning Streak, starring BILL CULLEN!!"

FORMAT #2 SPIEL:
"The stakes get higher and higher with every single letter, but only one player will win it all, on… Winning Streak, with your host, BILL CULLEN!!"

Winning Streak was a tournament-like word game show that didn't quite click in with viewers.

Two contestants (one a returning champion), raced to see who can first spell a word that fits into a given category. They faced a game board of 16 letters with the category into which the word must fit displayed above it.

On a player's turn he/she chose a letter, and a question in which the answer began with that letter was read by host Cullen (just like in his future show Blockbusters). Each question was a toss-up, and the first player to buzz in got a chance to answer. A correct answer won the contestant that letter, but an incorrect answer automatically gave the opposing player the letter. The player who won the chosen letter earned the privilege of either placing the letter in any one of the seven positions on a display in front of them or discarding it. Either way, the player in control had the right to choose another letter. The first player to make a word that fit into the given category won the round and moved on to the bonus board.

A later format involved scoring points instead of spelling words, with the top scorer earning one of two spots on the Final Showdown.

The winning contestant faced a board of 18 numbered squares around the frame of the board. The first six squares on the top row hid money amounts from $100 to $200 while the rest, down both sides and on the bottom, hid letters.

To start, the contestant selected one of the six money squares; that became the starting dollar amount. The player would then select one of the 12 letter squares and had five seconds to give a word that contained that chosen letter. If the given word was acceptable, the contestant won the starting amount and had a chance to either double it by selecting another hidden letter and giving another acceptable word with all uncovered letters, or stop and take his/her earnings to that point.

This continued until the player elected to quit with his/her winnings, gave an unacceptable word, or failed to come up with a word within the time limit.

When the Money Board round ended, another first-round match was played with two new contestants, while the winner of the first game watched the action from a podium on the side of the stage. The gameplay was identical to the first round, as was the bonus game. If either one of the winners of either match lost his/her money on the bonus board, the other player became the champion; if both winners stopped with money, they faced off against each other in a "final showdown" round.

The top winner had the option of playing first or deferring to their opponent. Then, both contestants took turns playing the Money Board round described above. They kept playing until one player failed, at which point the other player became the day's champion and won the combined total of the money won by both players from their bonus board rounds.

A later format change involved the two winners of each game building a jackpot with each correct word. One player chose a number from 1 to 6 to reveal a cash amount which would be added to the jackpot for each correct word. As soon as one player failed, the other player won the pot and became the champion.

Winning Streak replaced Stewart and Cullen's Three on a Match, swapping time slots with Jeopardy! NBC placed Streak at 10:30 AM (9:30 Central) against CBS' strong Gambit; as such, Streak made no impact against its competition and ended after six months along with Jeopardy!

Its replacement was a show still airing today in syndication: Wheel of Fortune. Jeopardy!, the show with which Winning Streak was cancelled, returned in syndication in 1984 (and it still airs today).

Bill Cullen sported a different wardrobe and hairstyle from the ones to which most of his fans were accustomed, possibly due to directives by NBC daytime programming head Lin Bolen. He sported longer hair (a decided contrast to his crew cut on the original Price is Right and Eye Guess) and also wore shirts without neckties, unbuttoned at least one row down. Several other daytime game show hosts followed this trend during that period.

The rules changed several times during the run; however, little is known about these changes since there are no episodes known to exist besides one (see below).

Announcer Don Pardo stated at the top of each episode that a contestant could win "over $100,000". As the top dollar value on the Money Board was $200, winning $100,000 was only possible if a contestant found that card and gave an acceptable word containing ten letters he or she had picked. Due to the extremely high difficulty of achieving this, Money Board totals never approached $25,000 and rarely reached $10,000; amounts played for in the Final Showdown were approximately the same: over $200,000 in theory, but considerably less in practice.

The above states, however, the show was in fact drastically understating its top prize (although this may have been on purpose). In theory, a contestant could win $409,600 by finding the top dollar value and using all twelve letters; if such a feat was duplicated by the following contestant, the resulting Final Showdown would be worth a massive $819,200, an amount that would not be out of place on the big-money game shows of today. 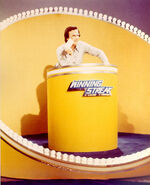 The series was likely destroyed by NBC as per network practices of the era. One episode exists, and has been aired on Game Show Network.

The episode, during the show's original run, was pre-empted on August 9, 1974 by coverage of President Richard Nixon's resignation due to his deep involvement in the Watergate scandal that spanned the past two years; due to the pre-emption, the day's episode was "tossed aside" and saved when the rest of the run was (presumably) destroyed.

Retrieved from "https://gameshows.fandom.com/wiki/Winning_Streak?oldid=226195"
Community content is available under CC-BY-SA unless otherwise noted.