PILOT OPENING SPIEL:
"Could Pat Sajak hitch his "OXYMORON" to a cart? When Betty White goes "DINGBAT" hunting, does she use a net? Is Stuart Pankin's "KISMET" listed in the telephone book? We'll find out the answer to those questions and a lot more as we play television's funniest new game show… WORDPLAY! And here's your host, the man of many words, PETER TOMARKEN!"

SAMPLE OPENING SPIEL:
"Did Bert Convy have trouble in "POLYMATH" while going to school? If Abby Dalton met a "GRIMALKIN", would it be love at first sight? When Bill Rafferty sees a "BRUME" does he immediately clean his house? We'll find out the answers to these questions and a lot more, as we play television's funniest (new) game show… WORDPLAY! And here's the star of Wordplay, that man of many words, TOM KENNEDY!

Wordplay was a game of words & definitions. It was a show where two contestants faced a panel of three celebrities who gave definitions to wacko & unusual words. The words were all found in Webster's 3rd New International Dictionary.

The game was played with two contestants (the returning champion who sat in the red podium, and the challenger who sat in the yellow podium) and a game board of nine words (the middle column was raised higher than the outer columns). The object of the game was to figure out the definitions to those words. The player in control (starting with the champion or the red player) chose a word and the panel gave three possible definitions to that word (one definition per star) along with humorous stories about the definition. Once the definitions were given, the player had to then choose which definition was correct. A correct choice won a money amount hidden behind the word, but an incorrect choice gave the opponent a chance to choose from the remaining definitions. If the word chosen was connected to previously revealed dollar amounts, the contestant won the combined total of all connected money amounts; if both contestants chose a wrong definition, a block went up and all connections to it were dead. The game was played in three rounds of two words each (meaning that they'll be finding out the definitions to six of the words), and at the beginning of each new round, the unrevealed money amounts were doubled.

Here are the money amounts for each round:

In addition to the cash, one of the words in the game was a bonus word. The player who picked that and chose the right definition not only won the hidden dollar amount, but also a trip.

The player with the most money at the end of Round 3 won the game and kept the cash. If the game ended in a tie, one last word was played. The celebrities did not give wild stories this time around; they only gave straight definitions. The champion who selected that word could choose to either go for the right definition or pass it to his/her opponent. The correct definition choice won the game, but an incorrect definition gave the opponent the hidden money and the game. The winner of the game won the right to play Double Definitions for a cash jackpot that started at $5,000 and grew by $2,500 for every day it was not won.

The Wordplay game board

The glowing box on the lower left indicates that the word chosen is the bonus word.

Five words were played and three of amounts showing are connected.

The end of the game. Notice that the bottom box in column two turned into a block.

The Wordplay panel area with the chosen word superimposed on the desk.

In the Double Definitions round, the winning player faced a game board of 24 connected boxes numbered 1-24. Behind each box were two definitions to one single word (Ex: Hall Person/Special TV Screen, the word would be monitor). The object of this game was to connect from the left side of the board to the right (ala Blockbusters' Gold Rush/Run) in 45 seconds or less. The champion chose a box and exposed the two definitions behind it; he/she could take as many guesses as needed and as soon as they guessed the right word, a dollar sign ($) appeared in that box and he/she moved on to the next. If the contestant passed on a box, a block went up, and the contestant had to then work his/her way around it. Each correct word/captured box was worth $100, and making the connection won the jackpot. The highest jackpot won was $27,500, and the series' final jackpot won was $7,500.

The set is turning from the main game monitor to...

The Double Definitions Game Board

A pair of definitions being deciphered.

Contestant Lonnie Burr of the Mouseketeers is halfway across the board.

Here's another contestant Diane Magin who's one away from winning.

Champions stayed on the show until they lost the main game or won three times. 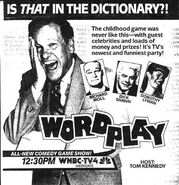 Page 1 of the Press Release sent out to NBC affiliates. This one describes the show, as well as gives a brief bio of host Tom Kennedy.

Page 2 of the Press Release sent out to NBC affiliates. This one talks about the announcement that the series was sold, the Halloween connection, and the fact that Wordplay was based on a parlor game.

Page 3 of the Press Release sent out to NBC affiliates. This one talks more about the Halloween connection, and Fiedler & Berlin's past two attempts at a game show. Notice the mention of the pilot episode, but without the mention of its host, Peter Tomarken.

Last Page of the Press Release sent out to NBC affiliates. This one gives the complete credits for the premiere week.

Probably the ticket to the very last taping of the show.

Call My Bluff – Similar show produced by Goodson-Todman Enterprises
Oh My Word – Similar show aired locally & nationally from 1965 to 1967
Take My Word For It – Similar show that is a revival of Oh My Word; aired in syndication from 1982 to 1983