Worldvision Enterprises, Inc. was a television program distributor established in July 1953 as ABC Film Syndication, the domestic and overseas program distribution arm of the ABC Television Network. They primarily licensed programs from independent producers, rather than producing their content. Today it is known as CBS Television Distribution.

The company was created in 1953 by the American Broadcasting Company (ABC) as ABC Films.

In 1971, as a result of the fin-syn rules, the FCC barred the participation of networks in the syndication of their programs. ABC Films was spun off and renamed Worldvision on March 30, 1973.

Their home video division released numerous Hanna-Barbera titles and Jack Nicklaus' Golf My Way instructional video series. They were also responsible for the television distribution of a majority of the Carolco Pictures feature film library (inherited from Orbis Communications, which was a division of Carolco before the studio went bankrupt).

Worldvision has been owned by many companies over the years. The growth of its home video division was primarily under the ownership of Taft Broadcasting, which acquired the company in 1979, and later became Great American Broadcasting, under Carl Lindner, Jr.

Television producer Aaron Spelling, attempting to find an outlet to distribute his programs, attempted to buy Worldvision from Great American. Lindner told Spelling that he was not interested in selling the company, but decided to merge with Spelling, giving both of them Worldvision. The merger was finalized on March 1, 1989.

In later years, Aaron Spelling consolidated his companies, and Worldvision as a wholly functioning unit ceased to exist and became folded into Republic Pictures (which Spelling bought in 1994), although Worldvision as a distribution unit continued for many years after until Spelling/Republic merged with Viacom (which also started as a syndication arm of a television network, in this case, CBS) in 1999, the same year Viacom announced its acquisition of former parent CBS (completed in 2000). These mergers allowed Viacom to become the second-largest media conglomerate in the world. Viacom later renamed itself to CBS Corporation and spun off its basic cable and motion picture interests into a "new" Viacom (for its impact on the former Worldvision library, see below). FremantleMedia acquired some of Worldvision's program catalog for certain territories outside the U.S.

The company's logo, as it appeared at the end of the programs it distributed, carried the following disclaimer: "Not affiliated with World Vision International, a religious and charitable organization." This was because, in the mid-1970s, the charity sued the syndicator for its use of the "Worldvision" name. They eventually settled, with Worldvision allowed to continue using the name for the syndication company, provided that a disclaimer was included to distance themselves from World Vision International, which has been implemented since 1974.

Their company logo is a wire globe with a circle-shaped boxy W on it.

Black Background
Add a photo to this gallery 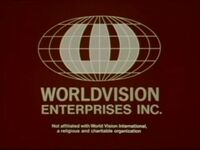 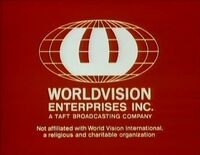 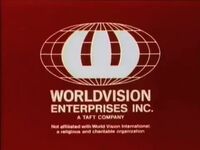 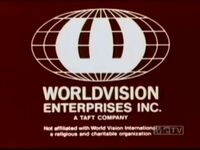 Second Half
Add a photo to this gallery

Retrieved from "https://gameshows.fandom.com/wiki/Worldvision_Enterprises?oldid=222909"
Community content is available under CC-BY-SA unless otherwise noted.