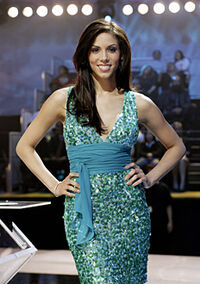 Yesenia Adame was born and raised in Los Angeles and has dipped her toes in a little bit of everything to do with entertainment. Yesenia's desire to entertain and challenge herself began early on in gymnastics. Her innate athletic ability led her to become a competitive gymnast at a very young age. After gymnastics, she was accepted to the L.A. County High School for the Arts where she majored in dance. There she learned a variety of forms including: Ballet, Jazz, Modern and Salsa. However, she soon developed a passion for Salsa and pursued it intently. She then began competing professionally with her partner, winning numerous 1st place titles as well as 2nd in the ESPN World Salsa Championships.

Yesenia has appeared several times as a special guest performer on Dancing with the Stars and has graced the pages of ads for mainstream companies such as Old Navy, Disney and Diet Coke Zero just to name a few. Her television credits also includes roles on Brothers and Sisters, CSI: Miami, Days of our Lives and Gossip Girl. Yesenia's film credits includes: Angels & Demons where she was thrilled to work with award-winning producer, Brian Grazer and director Ron Howard. She can also be seen in Mano, a film based on salsa dancing where she is the female lead.

Yesenia is very proud of having the #1 selling salsa instructional DVD in the world titled Salsa...Solo. By popular demand she has not created her second DVD Sexy Salsa. Her passion for physical fitness has significantly contributed o her worldwide recognition. A few of the other DVDs she has worked on includes: Dancing with the Stars Latin Cardio Dance and Total Self Defense Technique for Women. She had the pleasure of hosting a fitness segment alongside Paula Abdul and LPGA tournament winning professional, Natalie Gulbis. She has also helped people shed the pounds as a professional dancer on the show Dance Your Ass Off!.

One of the things Yesenia enjoys most is hosting where she gets to let her hair down and just be her fun, loving self. Yesenia found rapid progress booking as co-host position on the primetime ABC show National Bingo Night. She has also landed one of her dream jobs as the new host of E!'s Wild On.... Her latest project was hosting a new show for the E! channel called, That Morning Show.

Retrieved from "https://gameshows.fandom.com/wiki/Yesenia_Adame?oldid=214896"
Community content is available under CC-BY-SA unless otherwise noted.